Early Blue Violets, Viola adunca, are both one of the earliest flowers to come out, and also one of the latest. They flower twice in a year, but that second flower is almost impossible to see! 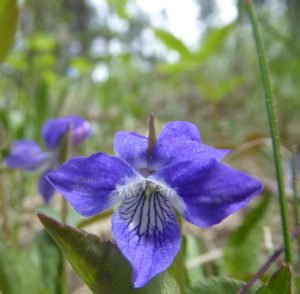 With a classic purple violet colour, even though the flower is small, you can’t help but see them in late April through to the end of May. Early Blue Violets can be found in many environments, from the lowlands and dry roadsides, to the alpine and tundra-like terrain, and through the forest as well. The can be solitary, or grow in small patches.

These first obvious flowers are, of course, there to be fertilized. Yet few of them are. If they aren’t fertilized, and no seeds appear, in the fall, a second set of flowers is produced. These ones are super small and hidden in the now–nondescript leaves, or even underground. These flowers never even open – they just fertilize themselves, and produce copious quantities of tiny seeds. These seeds are oily and attract ants. The ants collect the seeds, which disperses them.

Take a careful look at the flower, and you’ll see that one petal ends in a hook. Translate that to Latin and you get “Adunca,” which is where the Latin name for the plant comes from.