This content, written by the Friends, originally appeared in the June 5, 2020 Weekly Bear Report produced by Bow Valley Wildsmart.

Living and recreating safely in bear country means understanding many things. Signs that bears are around, and what to do in a bear encounter are just 2. As we wander in the wilderness (or even in town sites) we are travelling in a bear’s home. It’s their living areas, dining areas, and even their bathrooms. Recognizing food that bears are currently eating can help raise your awareness of the possibility that bears are around where you are at any given moment.

In mid-June, bears are all down in the valley bottoms. Sightings of bears in towns and along roadsides increase. Part of this is because it’s just coming to the end of elk calving seasons. A bear getting their teeth on a baby elk would be great for the bear (not so much for the elk, but then there’s a lot more of them than bears).

But bears aren’t that great when it comes to hunting. In general, they get FAR more energy from plants than meat. Now is the time of the year for one of the Top 5 Plant Foods for bears in this area: Dandelions. 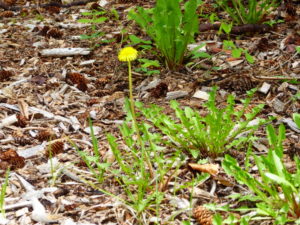 In case you haven’t noticed, Dandelions grow everywhere people are. That’s because the Dandelions you see, Taraxacum officinale, are not native. There are 2 native dandelions: the Alpine Dandelion (another Taraxacum species) and the “False Dandelion” (which is not a Taraxacum, so not a Dandelion, despite being named one). The native species are only found in the high alpine. But they are FAR outnumbered by the common, lawn variety Dandelion.

Though native to Europe and Russia, the first Dandelions in North America were intentionally brought over on the Mayflower! Basically all parts of the plant are edible. They’ve been a significant part of human diets for much of recorded history, including the Egyptians, Romans, Greeks and Chinese. From wine to coffee to salad greens, people have eaten a lot of dandelions despite their diuretic properties. You can even make rubber from the latex in the flower stem (though the latex itself is a laxative). As a result, people took Dandelions with them as they moved around the planet.

What the bears eat

Bears like the yellow flower best, though have been recorded digging for the roots. You can see Grizzly 136 chowing down on Dandelion flowers at the top of this article. The flowers are full of protein and carbohydrates, are sweet, and full of vitamins as well. And, like all the best bear food, they are very, very plentiful in the right spaces. Dandelions are one of the first flowers out in late May. They stay in flower through June and into mid July, when other berries start up.

It should come as no surprise that the scat of a bear eating Dandelions will show signs of yellow, though less than you might think. Dandelions are readily and almost entirely digestible. Generally, Dandelion-filled scat is a black to pale greeny-brown with some yellow flecks as shown in the picture. 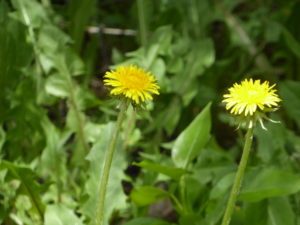 Dandelions like disturbed soil, need a lot of sunlight, and are where people are. We just described roadsides. That’s why many of the bear sightings in the June timeframe are beside the road. Dandelions spread like crazy along roadsides and in ditches, and occasionally along trails, though generally not too deep into the forest. A dense forest isn’t a great habitat for them. So roadsides are where the Dandelions are, and where the bears are in early summer. This makes roadside collisions a big risk everywhere.

The wildlife fences along the TransCanada are good at keeping ungulates out, but are readily climbed by bears. At least one roadside black bear death near the Sunshine turn off in 2019 was due to bears climbing the fence to get dandelions in the median and on the shoulders. It’s not K-Country, but Banff has now electrified a short stretch of fencing around the Cascade Power Plant. It is an experiment to keep bears from getting on the highway to eat the dandelions. 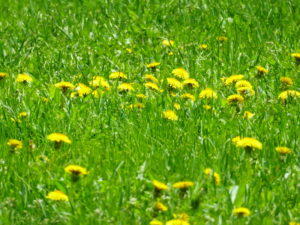 When we talk about “controlling attractants” in the populated areas of K-Country, a lot of folks think of crabapple and other fruit trees. However, Dandelions also qualify, especially if you’re proximal to the forest edges in towns in K-Country. We’re never going to eliminate this invasive plant, however. Hand digging, and simply plucking the flowers each day both work, and are better strategies than chemical ones, for obvious reasons.

We think there’s a degree of irony that bears here (and bees, too) have come to rely on an introduced species for their survival. But bears are pretty adaptable. If they weren’t chowing down on something we basically planted for them, they would find the “next best thing”.