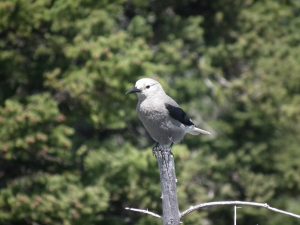 Big. Brash. Bold. And tied forever to the Whitebark Pine. It’s hard to miss a Clark’s Nutcracker (Nucifraga columbiana) when you see one. Some confuse it with the Canada Jay, a fellow member of the corvid family (along with other jays, crows and ravens). But it’s long, prominent bill, smooth feathers, crisp black and white marking and its large size are the giveaways.

Like other corvids, Clark’s are smart. They stash food all summer long, and are experts at finding it again in the winter. We have watched Clark’s stuff seeds into notches in tree bark, then see them come get them again days later.

Not really a nutcracker

They don’t crack nuts; when first identified, they were thought to be a woodpecker, and got misnamed. What they crack is conifer cones, and they are possibly the only birds that can crack into the cones of the Whitebark Pine (and they do a pretty good job at Limber Pine cones, too). Whitebarks are almost entirely dependent on Clark’s for dispersal and reproduction. Data suggests Clark’s and whitebarks co-evolved, resulting in this symbiosis. Clark’s even have a unique adaptation among birds: a pouch in their throat where they can store up to 150 whitebark seeds. They fly these up to 10 km before burying them in clusters of 10-15 seeds. This is why you will typically find Whitebark Pines growing in little clumps of 2-4 trees.

Both the Whitebark and Limber Pines are a “species at risk” in Alberta, primarily due to a disease called White Pine Blister Rust, a fungus accidentally introduced into North America in the early 1900’s; you can read more about this problem on the Limber Pine or Whitebark Pine pages. How that will affect Clark’s is uncertain. 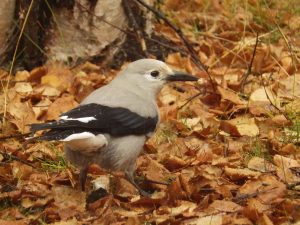 Most Whitebark Pines in K-Country, and thus most Clark’s, are found in the Spray Valley and Highwood Pass areas. In areas where there are Clark’s but not many Whitebarks, you’ll quickly find out why they got the nickname “camp robber” just like their cousins the Canada Jays. They are bold enough to steal food from picnic tables, and the ones where we live are quite adept at breaking into heavily guarded bird feeders. They do not migrate, but Clark’s are primarily in the valley bottoms during the winter so seen frequently, and move up higher into the mountains in the summer.

Meet some of the other fascinating Critters of Kananaskis Country here!