Lichens are a bit strange. One guidebook says, “think of lichens as fungi that have discovered agriculture”. Lichens are a fungus (similar to mushrooms) that cultivates algae inside them. The algae inside are protected (a win for them, which is why they live there), and through photosynthesis, generate carbohydrates, vitamins and proteins that the fungus lives on, which is a win for them. The ultimate in symbiotic relationships.

There are over 400 visible macrolichen species in the Rockies (ones big enough to see easily), and over 1,000 species in total if you had a microscope and went looking. We have also written about Usnea (Old Man’s Beard), Hypogymnia and Wolf lichens as well. 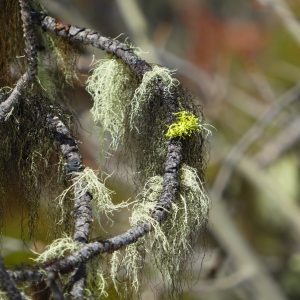 Bryoria is another tree-dwelling lichen species, which can often be found growing beside Usnea (both are pictured at right, with some Wolf Lichen, too). Many times we have looked at Bryoria and wondered if it was in fact dead Usnea. However, while Bryoria are black, wispy tufts that seriously look dead and dried up, they are neither. They are also known as Horsehair lichens, because they look just like bits of hair scraped off onto a tree from a horse.

As noted, Bryoria grow in trees, and can’t handle being buried in snow. The lowest level you will see it growing is the maximum snow depth seen in an average winter. If a Bryoria-covered tree falls over, only the lichens that are above the mean snow depth will survive. Remember, lichens are not true epiphytes, but they don’t damage the trees they grow on, nor draw nourishment from them. They just kinda “hang on”, so don’t care if the tree they are on is alive or dead. We explored their relationship with the tree more in our Usnea page. Other than being buried in snow, it’s really hard to kill this lichen. 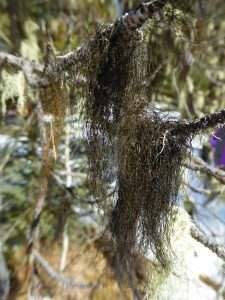 There two main types of Bryoria in K-Country. The most common by far is Speckled Horsehair, Bryoria fuscescens, and they are pure black with the odd sparkly white fleck. If you ever look closely and see Bryoria hairs that are kinked into elbow bends, this is caused by a parasitic fungus that is getting at the algae inside the Bryoria’s own fungus. Otherwise, look carefully at those sparkly flecks (which you can even make out if you enlarge the photo). These are the reproductive bits. They are holes in the fungus’ walls where the interior algae and cyanobacteria is getting out to spread. It reproduces by literally blowing around in the breeze, catching onto trees.

Less common is Bryoria Fremontii, also known as Wila, Edible Horsehair or Tree Hair. These are more yellow- or reddish-brown, less kinky and straighter. True to its name, this one is edible. Many animals including deer, elk, moose, caribou and flying squirrels eat it. Indigenous people washed Wila, then cooked it with onions, roots & bulbs and dried it into cakes as a winter staple food, though this was much more common in central BC and Washington/Idaho than areas east of the Divide including K-Country.

In early 2020, the Canadian Museum of Nature held a national poll to select Canada’s National Lichen. Unfortunately, while it did well, Bryoria placed a close 3rd, (missing 2nd place by just 236 votes). It garnered 18.6% of the over 18,000 votes cast. Read more about the voting results here.

Read more about some of the fascinating lichens and fungi of K-Country here!