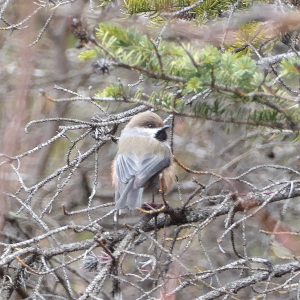 Everyone is familiar with Chickadees. Various types live all over the province. But with all the Black Capped Chickadees around (and eating out of your hand), we’re betting that less than 1% of your chickadee sightings are of the Boreal Chickadee. You almost HAVE to come to K-Country to see them.

Boreal Chickadees are readily distinguished from the fairly abundant Mountain Chickadee. They share some visual similarity to the Black Cap in that they have a solid dark crown and solid throat patch. But Boreals are a rusty brown when compared to the Black Capped’s steely gray back and sides. And while the Black Capped is a fairly bright white on the chest, the Boreals are much more muted. 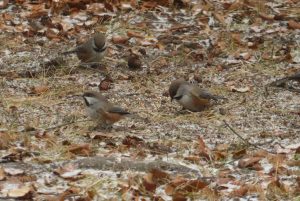 Boreals aren’t as adapted to people as much as Black Caps. Rather than being serious city dwellers, they are mostly denizens of the boreal forest. Look for them not in open meadows or aspen stands, but in dense spruce and pine forests, and the denser the better. Rumour has it that they mostly eat in the trees and stay off the ground. However, often we see them foraging on the ground while the Black Caps and Mountains are flitting in the trees around them. We will suggest they are well camouflaged for ground foraging; the photo shows one of the three being nearly invisible. 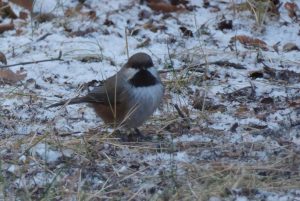 Chickadees are energy-burning machines, with a metabolic rate up near that of hummingbirds. They must feed daily to survive. Boreals build food caches near their nests to help with that. They don’t migrate, though there can be some north-south movement within their range. Since it occasionally snows heavily or gets very cold in the forest in the winter – making feeding difficult or nearly impossible – unlike other chickadees, Boreals have the unique ability to put themselves into a state of torpor. They can choose to shut themselves down to minimal life support levels and ride out ugly weather. They can sit like this for up to a week before waking themselves up.

Boreals are not as vocal as other chickadees. During June’s nesting season, they rarely make noise at all. They often mate for life. Like other chickadees, they hang out in flocks of 5-25 birds, that may even include other kinds of chickadees. They nest in tree cavities, and lay 5-8 eggs a year.