The Black-Capped Chickadee (Poecile atricapillus) has possibly introduced more people to the love of birding than any other. Intolerably cute, bold and friendly, plentiful and easy to attract to feeders (or your hand), it’s hard to believe anyone has not seen at least one. 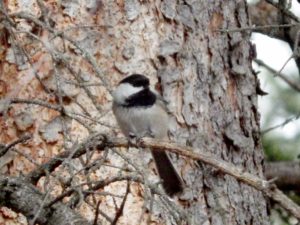 K-Country features all three of the most common Chickadee species in Alberta. It’s not that hard to tell them apart. Mountain Chickadees have a white eyebrow. Boreal Chickadees have a cinnamon brown colour to their tummies, instead of the lighter gray and buff of the Black-Caps.

All three travel in flocks of 3 to more than a dozen birds, sometimes even of multiple species. All three eat seeds and insects. None of the three migrate. All are little bundles of energy.

Most people can identify the call of a chickadee, which indeed sounds like its name: “chick-a-dee-dee-dee-dee”. But did you know that individual flocks adopt a specific number of “dees”? This helps them identify their brethren. The call is actually made up of 4 distinct units (A through D). Calls have been studied for decades, trying to understand what each unit means. The D unit indicates information about predators, and the C about food sources. The various patterns of calls can get quite complex. 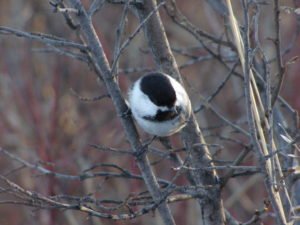 Meet more of the fun critters of K-Country here!