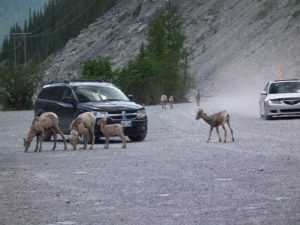 It’s hard to not pay attention to Bighorn Sheep, Alberta’s provincial animal. They’re the ones causing regular roadblocks in places like the top of the Canmore Hill on 742 (pictured at right), on Hwy 40 near Barrier Lake, near Galatea, near Grizzly Creek, and at the Kananaskis Lakes Trail Turnoff, the Sibbald Flats, all along the Sheep and Elbow Trails, to name a few.

Since they’re reasonably well known, we won’t cover too much of the basics. Instead, we’ll touch on some things you probably don’t know about these critters.

They need cold to stay healthy, and they eat dirt 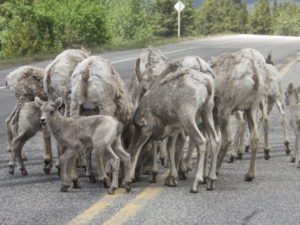 For starters, really cold weather is good for them. When they breathe it in, it kills parasites they get like lungworm. Accordingly, mild winters can be hard on them. Yes, they lick salt off the road (they love salt and travel far to get to mineral licks). But they also eat gravel, in part to get some essential minerals. Gravel also aids in their digestion of the tough grasses and lichens they eat. And they eat asphalt because it tastes sweet, though it’s not good for them.

Age them by the horns 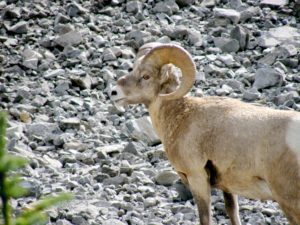 They get growth rings on their horns (which they don’t shed because they’re horns, not antlers). However, it takes some close inspection to age them. That’s because they make a few rings every year, and only the major ones are annual ones.

We’ve studied the photo at right in detail and can’t for the life of us figure out the animal’s age. 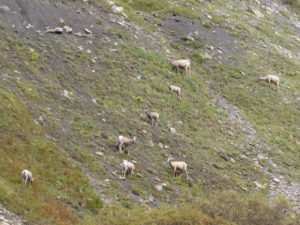 Bighorn sheep generally hate being in a forest and are rarely found more than 200 m away from open areas. Ben Gadd suggests that fire suppression in the last 100 years has created more forests and less open space, reducing bighorn habitat and isolating populations. This is exacerbated by the fact that Bighorn flocks use a small grazing area of only a few square kilometres. The flock that’s at the top of the Canmore Hill, for instance, is never very far from the top of that hill. Only young sheep disbursing from flocks move very far. Even they don’t go much farther than 40 km.

The female’s in charge 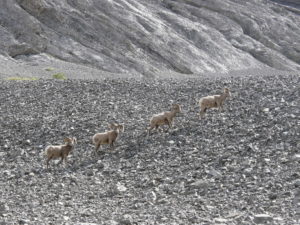 Flocks are always run by an old ewe, who leads the flock on a regular circuit of feeding areas. That Canmore Hill crowd is there for a few days, gone for a week or so, then come back.

The one male who won the famous head butting contests in November/December joins them for a bit to mate. Then he generally leaves, and is often killed by predators, weakened by so many head butts and so much mating.

The ewes and lambs stay generally lower, the males drift off into little flocks higher up in the mountains. The photo above right is a typical male flock in September, high up in the rocks. Lambs are predated by many critters including like lynx, coyote and golden eagles. Both adults and lambs are taken by cougars, grizzlies and wolves. 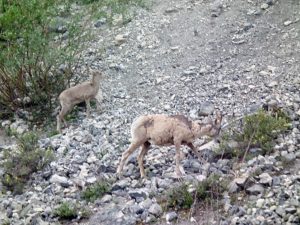 Most people know Bighorns build up a thick winter coat which sheds in June, making them look almost mangy for a month or so. While they likely have skin parasites and ticks (remember: anywhere with Bighorns is VERY tick prone), that shedding is normal and not a sign of anything.