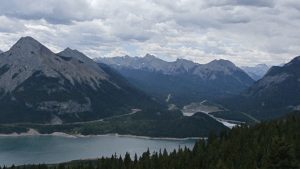 Barrier Lookout ties with Moose Mountain Lookout as the most popular lookout hike destination in K-Country. Like Moose, you can even bike most of the way to it. Barrier Lookout is visible from the TransCanada all the way from Scott Lake Hill to almost Canmore. It is accessed from Barrier Dam Day Use Area via the Prairie View Trail. You can also get at it by connecting to the Prairie View Trail from the Quaite Valley trail. You can even make loops using the Jewel Pass trail so it’s not an “up and back”.

Two lookouts for one price! 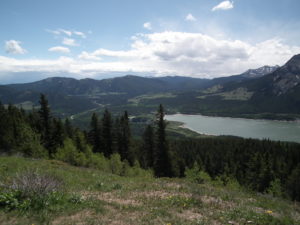 The “normal” route up is via the official Prairie View Trail. It is a steady, though not that interesting, climb through a pleasant forest on a broad old road. The road was originally used to supply the lookout, but no more. When the trail achieves the ridge line and turns west, it steepens somewhat. It breaks out of the forest and arrives at the long-abandoned location of the original fire look: Pigeon Lookout. As readers of Gillean Daffern know, the original Pigeon Lookout stood on the Prairie View Trail’s primary “lookout point”, where the photo to the right was taken.

The original Pigeon Lookout building was actually built as a guard tower for the WW2 prisoner of war camp at what is now the University of Calgary’ Barrier Lake Forestry Station across from Barrier Dam Day Use Area. After the camp was closed, it was moved up to the lookout site. It was used there until 1982 when it was moved to the UofC Field station, where it remains, and is slowly being engulfed by aspen and poplar trees. As a fire lookout, it was painted white with red trim, but has since been painted to a uniform… blah brown. 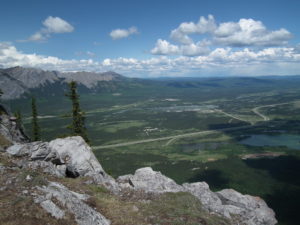 At the old Pigeon site, the views become tremendous. The next 800 m of the official trail becomes steep and rocky. It’s so much so that we really don’t know how mountain bikers ride up or down it. Next up is a giant white wall (a TransAlta microwave reflector), with another stunning view over Barrier Lake. The official trail does not go to the lookout. It peels off to the left and heads down to Jewel Pass from here.

The trail to the lookout from the white wall is unofficial, braided and unmarked. It heads off right from the reflector up the ridge more steeply. We find staying in the forest on the trails to the left easier than staying on the trails in the rocks near the cliff edge. 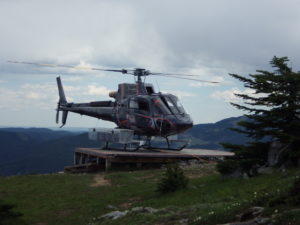 The current lookout, built in 1982, is quite the impressive structure. The lookout manager (for decades, it’s been a nice gentleman named Chip) has a couple of picnic tables for visitors near the helipad. No, you can’t use his washroom or his water; this is a private residence.

If you’re lucky and like helicopters, you might be there on a delivery day like we were in 2016. Chip was getting propane and other supplies. Essentially no supplies come to fire lookouts via ground any more. No matter, you have to remember when you visit that the lookout building is his home and workplace. So please, as always, stay away unless specifically invited nearby or in. 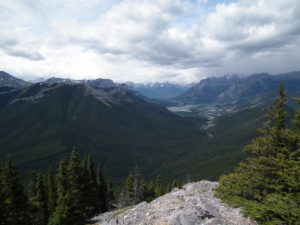 The views encompass the entire Bow Valley west to the edges of Canmore, east to Calgary, southeast to Moose Mountain over the Hunchback Hills, south down portions of the Kananaskis Valley, and almost the whole of the Heart Mountain Horseshoe scrambling route. And of course, you have incredible views of Barrier Lake and Mt. Baldy, too.

According to Mike Potter in his book Fire Lookout Hikes in the Canadian Rockies, the Stoney called the bluff where the lookout currently sits “Tokyapebi ipa“. This roughly translates to “lookout point for Blackfeet”. We are not the only ones to use this place.

Coming back down, you can head right at the microwave reflector and continue into Quaite Valley. Then just drop back towards Barrier Dam on the “new and improved” Jewel Pass trail (that the Friends helped Parks rebuild in 2013). The full loop from the dam, up Prairie View to the lookout (with a 45 min lunch break), and then down via Jewel Pass is about 19 km with 660 m height gain. It takes about 6:45 from start to finish.