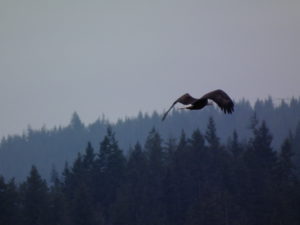 If you’re in K-Country, look up, and see a big black bird, you can usually count on it being the ubiquitous Common Raven. But sometimes, what you see is just too darned big to be a Raven. Odds are very good in these cases you’re seeing a Bald Eagle. Big size is the first big Bald Eagle giveaway.

You can see them year round, too. While some Bald Eagles may migrate, most will stick around. As a general rule, if there is open water around that has fish in it, Baldies will stay. The Bow River and the Kananaskis River usually have large open stretches of water in all but the coldest of winter days. That means food for the Baldies.

Fish, but not just fish 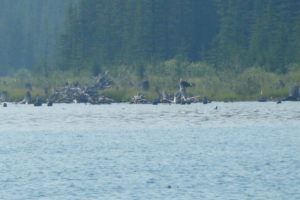 Baldies stick close to water because about 60% of their diet is fish. However, they are not as specialized as Ospreys. They will also go after waterfowl, hares, marmots, ground squirrels, foxes and small coyotes, carrion and other land animals. But they love fish, and are in the Sea Eagle family. Water is their home.

They are regular visitors at Lower and Upper K Lakes, the Bow River, Lac Des Arcs, Goat Pond (pictured at right), Spray Lakes and especially near the Spray Dam. Baldies are common in Calgary, notably from the weir down through Carburn Park, all the way to Fish Creek and beyond. They are common on the west coast especially at salmon run time, when there can be more than 20 Baldies in a single tree at one time. Ours don’t tend to congregate like that, however. 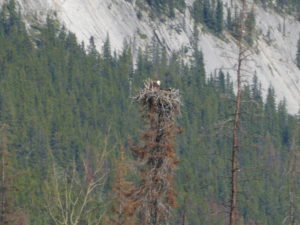 Bald Eagles build large, elaborate nests out of sticks that can be more than 8’ across and 10’ deep and weigh more than a ton. They are the biggest nest of any bird in the world. Like Ospreys, they reuse the same nest year after year, but each year they make it bigger. Like Canada Jays, they nest and mate early, often in late February. Their egg hatch in late April. 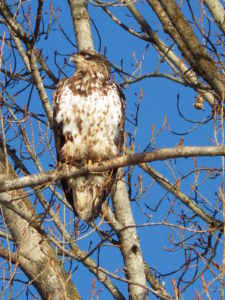 Baby Baldies have the fastest growth rate of any bird in the world. They gain up to 6 oz per day. They fledge after about 10 weeks, then disperse about 8 weeks later. That famous white head doesn’t show up until the birds achieve sexual maturity at 4-5 years of age. They live 20+ years in the wild.

Bald Eagle populations are now stable or rising after being become endangered in the USA in 1967 due to DDT use. That pesticide prevented calcium uptake and caused eggs to become too weak to be incubated. From a low of 412 nesting pairs in the 48 contiguous states in the 1950’s, Bald Eagles recovered to number over 100,000 in the early 1990’s. They are no longer considered threatened. In Alberta, they’re a non-game species and are protected.